You are here: Home COUPLE SPOTLIGHT Items filtered by date: May 2014 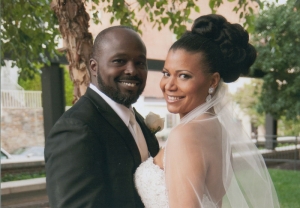 How did you meet?

It was April, 2007. My cousin and I were at a party at a mutual friend’s house and we were in the kitchen fixing ourselves a plate of food. Derrick and another gentleman entered the room.  My cousin and I looked at Derrick, and then at each other.  He was handsome! I’m sure our facial expressions said it all.  Derrick and I made eye contact for a few seconds, but, after that, nothing.  He seemed to ignore me.

A couple of hours later I was sitting in a chair checking messages on my cell phone when, in my peripheral vision, I noticed him walking by.  He stopped, turned around, and asked, “Were you staring at my butt?”  “Huh. You must be joking,” I said.  “No,” he said. “You were staring at my butt.  I could feel it.” It was a little corny, but I laughed, and it broke the ice.  So much so that we talked non-stop for three hours.  There was sooooooo much chemistry.  From that day forward, he pursued me, and I mean pursued me diligently.